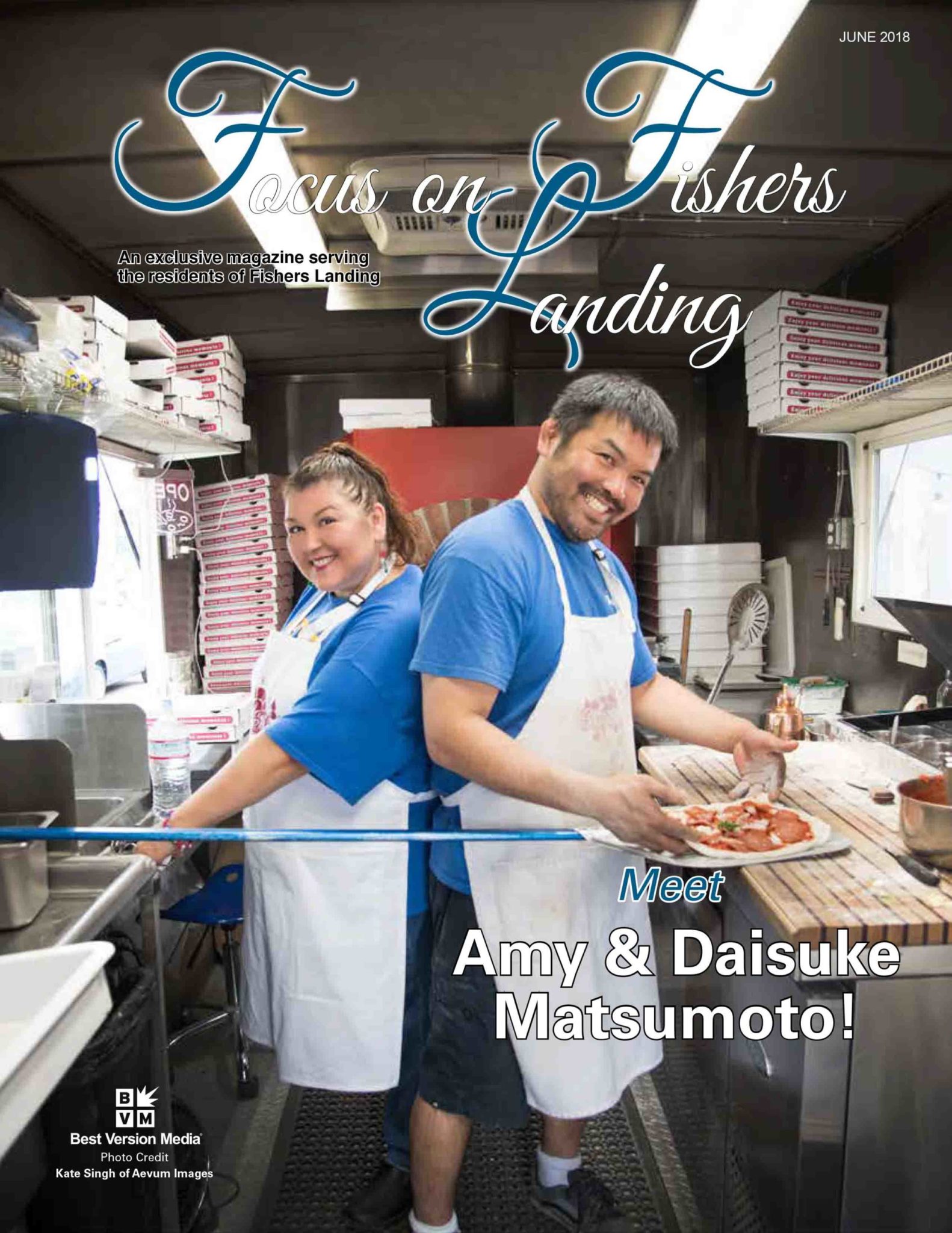 Meet one of Wy’east Middle School’s most devoted teachers…Amy Matsumoto!

Let’s start with how (and where) you met the love of your life…your husband, Daisuke.

Daisuke and I met in Nishinomiya, Japan (Sister city of Spokane, WA) outside of his family’s restaurant back in November 2003. My friend Harumi and I were looking forward to a nice quiet “girl’s night out” at an amazing restaurant. I had eaten at Caruso once the previous year and had fallen in love with Chef Tomio Matsumoto’s version of lemon chicken, so I knew this would be the place. Little did I know, however, that I would run into the love of my life…and my whole life would change.

As we were about to enter we were stopped by Daisuke and his massive grin. He shared that they were closed for the evening as his parents had to attend a funeral, but he was a chefin-training and knew of another place to eat. Daisuke joined us for dinner, and through my friend Harumi and her help with translation (Japanese to English/English to Japanese) and my weird version of “Italianized” Spanish I couldn’t believe how similar Daisuke and I were to each other. By the end of the evening my head was swarming and I felt I couldn’t breathe. It wasn’t an allergic reaction to anything, I was in love…and realized that I was sitting across from the man I was going to marry!

After dinner, I had to ask my friend over and over again, “Are you sure he likes me?” Then I threw up, called my mom back in Yakima, WA and told her, “I met the guy I’m going to marry.” Her response: “Well, go and call him.” It took me a week to go back to the restaurant and see him, but after that we were inseparable. It was magical, but with one little problem: his family.

So it’s practically “love at first sight”, right? What were the issues with his family?

Well, Daisuke Matsumoto is the only son in his family. He has a younger sister, Noriko, but in traditional Japanese culture, the wife of the first and only son must care for the son’s family. Was I ready for such responsibility?

The other problem? I am an American. Long story short, during World War II Daisuke’s grandfather was killed in the bombing of Nagasaki, leaving his father Tomio (only 9 at the time) and his 7 siblings and mother destitute. Tomio was forced to leave his family and head north to try and find a job as an apprentice. The fact that his father not only made it and found an apprenticeship is a grand feat in itself, but Tomio also ended up being one of Japan’s ever first top chefs in Italian cuisine.

Incredible! What happened next?

In the early 1970’s Daisuke’s father was working at a hotel as a chef when he was invited to compete a cooking contest ran by another chef from Naples, Italy…and he won. The prize? A restaurant of his own! Fast forward two decades, and Tomio Matsumoto was training his only son to take over Caruso, the restaurant he won years before in hopes that his son will carry on his legacy and continue to shine as a Southern Italian chef.

So, when I came into the picture, there were choices to be made. Daisuke had to choose between his family/restaurant or marrying me.

It was not an easy decision for either of us. I thought of staying longer in Japan, but my mother-in-law had hired people to try and break us up. Regardless, I decided to go back home. Daisuke came to visit for two weeks to meet my family and to check out what life would be like in the United States. It was a huge cultural shock for him, and he still hadn’t mastered the English language. By the time he boarded the plane to return to Japan, we both weren’t sure if we’d ever see each other again. He knew his parents and the Matsumoto Family were going to do whatever it took to keep him there in Japan, plus he didn’t want to shame his father in any way.

However, 6 months later he left everything behind in Japan and we married officially with family and friends on August 6th, 2005. One promise we made to each other is that even if we have to start from the bottom, we will always continue to help each other reach our life’s goals.

Twelve years later (this past December) we returned to Japan together as a couple…and everything had officially been forgiven. We were able to mend all relations with his parents, and they are very proud to see Daisuke and his success with our food cart business, and soon to be future restaurant. They too are very proud of me, and have told me that I am their true daughter and they couldn’t be happier. Even though we are not living in the same country, it feels good to know that we finally have their blessing.

That’s a wonderful story, Amy, and I’m so happy for you and Daisuke! What do you do for fun now that you’re happily married and settled down here in Vancouver?

Both of us love music. In fact, while Daisuke was in college he was an opera singer, and has studied classical music and literature. And along with his love of Southern Italian food, he also has learned to speak 4 languages: Japanese, English, Italian and some Spanish.

My favorite hobby prior to starting our food cart was throwing big parties, as I have a passion for hosting dinners for friends and neighbors. And like Daisuke, I’ve also enjoyed studying languages, and can speak English, Spanish, and Japanese.

We both love traveling, eating out, taking pictures, meeting new people, and studying other languages, but we also love creating communities. Since opening, our food cart Pizzeria La Sorrentina we’ve helped shape a great community of other food carts in Hazel Dell: Banh Mi Saigon, Hummus Hummus, La Oie Cajun Cuisine, and Papa Joe’s BBQ. We feel that we are helping to change and improve the food community of our area. We also enjoy being a part of SW Washington Slow Food Social that we co-host with Brother’s Cascadia Brewing the first Wednesday of each month. It’s been so amazing learning from and seeing directly how wonderful our own produce from local farmers is, and what variety they have.

In many ways, our lives revolve around work, because it’s also our passion. As a teacher over the past couple of years, I’ve been tremendously fortunate working with a great group of leaders to form communities of amazing and inquisitive students who want to learn about the Spanish speaking world, and all the wonderful opportunities they can encounter being bilingual or trilingual.

Last year, I took a small group of students to Costa Rica. This year, I have a bit larger group of students heading to Panama. And next year, I plan on doubling that and take another group to Nicaragua and Costa Rica. Although the student’s families provide the funds for the trip, I help the kids fundraise throughout the year, so they can #1) Begin to form a strong bond with those they will travel with and #2) They can feel that they are actively helping to pay for their trip. It’s important for me that the kids feel proud of their efforts, and can learn that where there’s a will, there’s a way.

For me, seeing firsthand how these students’ lives are changed for the better after only one week in another country is so meaningful to me as that is what helped shape who I am today. I also know that these kids, when they return home, are more willing and able to give back to their community as well, as many have already demonstrated when they return to help me with more programs I create in school – like camp counselor for a summer camp program I may run. Again, it is these types of communities that both Daisuke and I love forming. Maybe it’s because we have no family here, or maybe its because when you live in other countries you quickly learn that to “survive” you need a community, or maybe it’s just because we genuinely love people and truly enjoy learning from others.

Do you have any kids or pets?

Although Daisuke and I don’t have children ourselves, we both have nieces and nephews that we love to dote on in both the US and in Japan…plus we like to spoil my students at Wy’east! Both of us grew up in homes that struggled financially and emotionally, so it’s very important for us to serve as positive role models for younger children that has or are experiencing similar situations as we did. Whether it’s a student in a drama program, or a group of kids wanting to travel the world, or a student that wants to gain work experience or learn another language/culture, we are constantly aware that where and when we can be of support to someone younger who shows great motivation and passion, we will do our best to help them.

We do, however, have a couple of dogs: Daigoro Matsumoto (7 years old) and Tyana Rose Matsumoto (also 7 years old)… both are shih tzus.

Our dogs are our children, and we simply adore them! They are very silly, behaving like siblings stealing each others’ toys from each other, and whining when one takes the other’s treat. They really help to calm us after a stressful day or a hectic week. Neither of us grew up with dogs in our homes, so after we got Daigoro, the black and white one, we had to bring on a lil’ sister, Tyana. They are only two months apart and have been raised together since they were a month old.

They’ve been to doggy school, but aren’t always the brightest doggies on the block, if you know what I mean. But they are definitely the cutest little rascals we could ever imagine owning!

Yes! In March, Daisuke and I headed to Las Vegas to the International Pizza Expo, where Daisuke competed in the pizza napoletana division. There were 30 pizzaiolos (99% from Southern Italy that competed with either a Margherita, a Marinara or a Margherita DOC pizza). Only the top 3 were rewarded prize money, but we felt like the luckiest couple alive when Daisuke earned #6 pizzaiolo in the world!

The other pizzaiolos have been working and training for 20 + years. Daisuke has only worked three years as a pizzaiolo and has only had his food cart here in Vancouver for two years. So for us, this was the biggest and best compliment we could receive as reassurance for what we hope to do in the future… which is to open up a brick and mortar restaurant of our own.

That sounds fabulous, Amy…best of luck to you both. And thanks so much for being part of our magazine, and for being such an inspiration to your students at Wy’east. Salud!